HomeNewsMeet The D.C. Glydiators, The Electric Unicycle Fanatics Who Glide All Over The Region
News
By administrator

The Washington area has had no shortage of new electric vehicles on the streets, with electric bikes and scooters becoming increasingly popular.

But one group has a rare mode of transport. They’ve adopted electric unicycles, skateboards and “one wheels”  to explore the region.

Many people don’t know what they’re looking at the first time they see one roll by. They’ll shout “hey, what’s that thing you’re riding?”

So picture this: A 14-inch rubber wheel with a plastic cover. It has pedals that fold out. Some have lights, and some even have Bluetooth speakers in them.

Unlike the pedal-powered unicycle, there’s no seat. Riders stand straight up and glide effortlessly or at least that’s how it looks — gyroscopes help balance.

Lutalo Madzimoyo has been riding electric unicycles for a few years already.

“When you ride with the wheel, you’re part of the environment,” Madzimoyo said. “You can function as a pedestrian, as a car, you can always go as fast as a bicycle.

But this thing wasn’t his idea.
His son was bound for the University of Maryland and needed something to commute with. His other son was into it, too.
“They learned on their own and then taught me,” Madzimoyo said. “It’s been going on ever since… been crazy.”
E-unicycle technology evolved out of the Segways that you see tourists ride around the National Mall.
Many ride for fun, but plenty use it as a way to get to public transit, making that first or last mile go quick.

Learning As A Community

It turns out there’s a big online community for e-unicyclers.
Madzimoyo took his passion offline and into the real world, creating a meetup group of about 50 hobbyists, most of them men.
It’s a niche group that’s growing as the technology becomes cheaper and more reliable. They call themselves the “Glydiators.”
Their goal is to make people more aware of the mode of transportation and “promote their viability in the DMV as a flexible, fun, clean, and powerful new form of independence,” according to their mission statement.
“When we meet up, we ride, we became friends through riding,” Madzimoyo said.
Now it’s an every weekend event.

On a warm April Saturday in Anacostia, about a dozen riders trickle out of the Metro stop. They roll their unicycles in front of them with a handle, almost like a rolling suitcase or some kind of Star Wars droid.

The group has young and old riders of different backgrounds. Some have electric skateboards with handheld controllers. There are plenty of different models of unicycles, too.

Declan Kurant brought his King Song 14S. He rides a pedal-powered unicycle with another meetup group. That’s where he was introduced to e-unicycles.
“I fell in love with this all the same,” Kurant said.
Asked if the regular unicyclers see the electric version as cheating, he laughed and said, “maybe, I feel that way a little bit.”
You certainly don’t have to be athletic or skilled to ride one of these, but don’t expect to pick it up right away.
“You don’t get immediate gratification,” Madzimoyo said. “It’s not like a scooter that you can jump on and ride. There’s that learning curve.”

Madzimoyo let me borrow his e-wheel for a week. We started slow, rolling back and forth while I held on to a nearby wall. You gently press your feet forward to move and gently lean back to slow down or reverse. The hard part is staying balanced.
Even with a few days of practice, I never did quite get off the wall.
So don’t expect these to start showing up on the streets as the latest rentable trend.
Instead, you’ll have to pay $500 to $2,000 to get one of your own.

Exploring The Region
I took a bike when I met them for 20-plus mile ride called the “Trouble Man Campaign.” It was Marvin Gaye’s birthday, so they toured neighborhoods like Deanwood, where the singer grew up.
“We go out on our expeditions, we explore, we love Washington,” Madzimoyo said. “We love our city, so we go out and explore.”
Heads turn when you’re rolling with this group. Residents cheer them from porches. Drivers roll by slowly, rubbernecking.
When the group stops at a church for a quick bathroom break, the parishioners are astonished.
“Hey, dad, come see this!” one young woman says. “This is really cool. I’ve never seen anything like this.”

Riders like LeRoy Wells — he goes by “Mr. Adidas” because, well, he wears all things Adidas — play music from their wheels, on this ride, Bruno Mars’ “24K Magic” and Ludacris’ “Roll Out” were coming from the speakers. The group has fun and can go pretty fast, up to 25 or 30 mph.
Then we hit the hilly part of Anacostia.

That’s when I realize two important things:
One, there’s no way I can keep up with their top speeds on my bike. I’m huffing and puffing.
And two, these things have power. A rider with an electric skateboard decided to help me up the steep hill.
Even with a nasty incline, he’s pushing me on my bike with no problem.
And, at the top of that hill, is an incredible view of the neighborhood, the Anacostia River and the city.
Unlike me, these e-unicyclers haven’t broken a sweat. 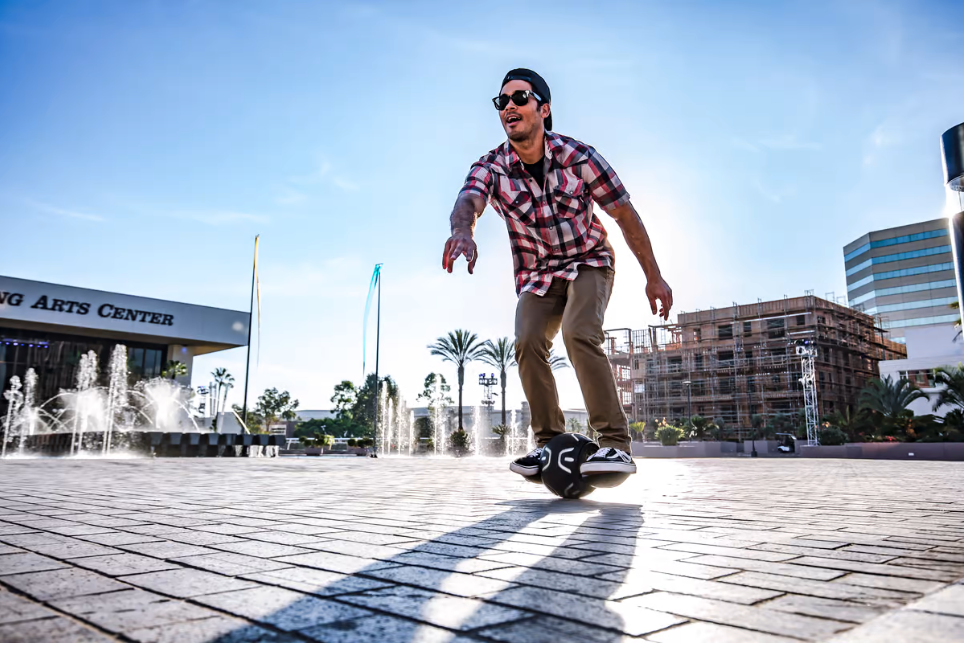 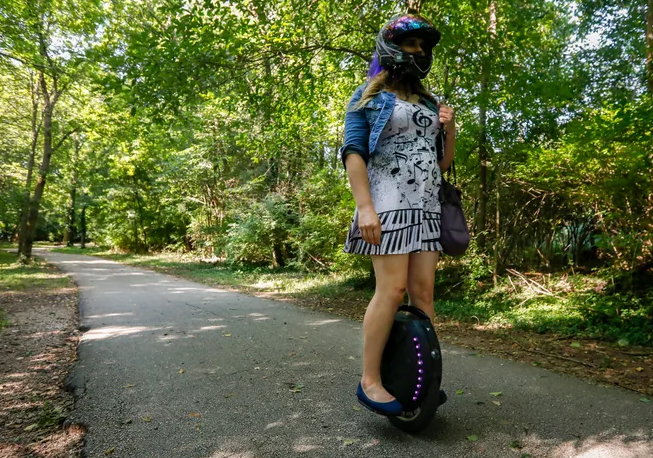